Usury is the practice of lending money at an exorbitantly high rate, so high that any reasonable person would find the rate to be unconscionable, even immoral. Every state in the union has laws to protect its residents from usury. The Texas Constitution limits loans to an annual percentage rate of 10 percent, unless the Legislature specifically sets a different rate. Accordingly, commercial loans are capped at an annual percentage rate of 18 percent, motor vehicle financing loans at 27 percent, and even pawn loans are capped at a shocking 240 percent. 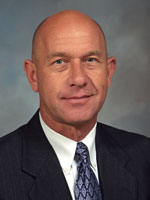 But there is a money-lending industry that cleverly skirts our state's usury laws, and it is thriving in Houston - much to the detriment of borrowers and our community.

Payday and auto title loans are low-dollar, high-interest loans that target low-income Texans. With no fee or rate caps, these loan products carry annualized percentage rates upward of 500 percent. Through excess fees and interest alone, these lenders drain $1.25 billion from our state annually and around $240 million from the Houston economy. Payday and auto title lenders often downplay the risks of their loans, prosper while trapping borrowers in debt, and push Texas families deeper into financial hardship. There are good reasons why this industry has earned its shark-like and predatory reputation.

To put that number in perspective, for every McDonald's in Houston, there are two payday and auto title loan storefronts, and each week, 140 cars are repossessed from Houstonians by auto title lenders.

An omnibus bill to regulate these businesses statewide was proposed this past regular legislative session. The bill failed to pass because the payday and auto title loan industry had so much influence in the crafting of the bill that members from both sides of the aisle felt that it was too weak to allow its preemption clause to wipe out the existing stronger city ordinances.

While some felt that any bill was better than no bill, we felt it was important to preserve our hometown's right to pass its own ordinance, an ordinance that would be right for our constituents and at least as strong as what has passed in other Texas cities.

In doing so, these cities have changed the political landscape around predatory lending reform, creating new interest in the Texas Legislature to address problems with these loans' cost and structure.

Adding Houston to the list of cities with strong payday and auto title ordinances will create a major new push for reform and benefit the bottom line of local families. A strong ordinance regulating payday and auto title lenders is essential to improving the economic conditions of Houston's citizens, including working families, students, elderly and veterans.

The industry would have our community believe that it is the only option for small-dollar loans for low- income families. Proverbs 22:7 states, "The rich rule over the poor, and the borrower is slave to the lender." You would think the industry has taken this biblical verse to heart for all the wrong reasons.

This is an industry that has been known for some very questionable, if not downright illegal, practices. Consumers report harassment, even including threats of jail time for not paying their loans in the manner dictated by the industry.

Most consumers of payday or auto title loans use them to pay for unexpected emergencies or for ordinary expenses because they simply do not make enough to make ends meet. In Houston, where almost one-quarter of the population lives below the federal poverty level, it is not in our community's best interest, nor is it wise to perpetuate the industry's message that they only have predatory loans to turn to.