State Sen. John Whitmire, D-Houston, is challenging some of the reasons Harris County has cited for its swelling jail population, and says it should not consider outsourcing inmates to out-of-state lockups.

In my story published Friday, an official says the county is getting to the point where it may have to consider shipping inmates to Louisiana again with the population at the state’s largest jail less than 100 inmates away from capacity. It is an expensive alternative the county resorted to more than four years ago, and one the sheriff’s office says it doesn’t want to try again. 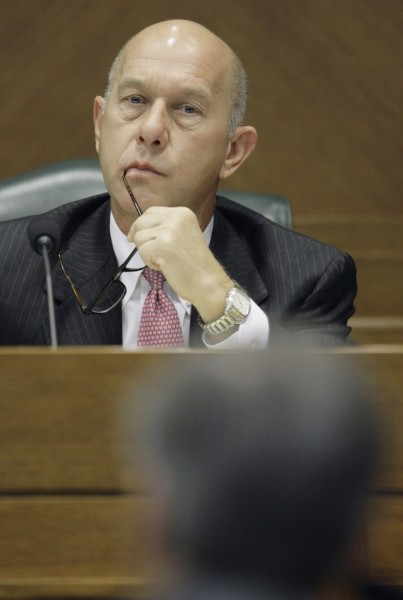 Whitmire says it is “a non-starter” as far as he’s concerned, and that he sees the recent uptick, which began this year, as a local problem with somewhat obvious solutions.

“I have a strong opinion that it’s not necessary,” said Whitmire, chairman of the Senate Criminal Justice Committee. “I thought it was outrageous when they did it a couple years ago.”

In Friday’s story, a county official links the escalation in part to two recent prison closures – something the Texas Department of Criminal Justice says has resulted in it taking longer to pick up inmates destined for prison. The county also points out there have been recent increases in the number of detainees awaiting trial, parole violations, felony case filings and people convicted of felonies, but ordered to spend time in the county jail instead of going to prison.

Most of these numbers can be found in the latest jail population report.

Whitmire acknowledged most of the latter escalations, blaming them on local policy he said needs to be changed, but said the prison closures have played little to no role in the general population uptick and also disputed the average increase given to the Chronicle by a  Texas Department of Criminal Justice spokesman on Thursday.

Noting the state prison system has “7,000 empty beds today,” Whitmire said that the closures have resulted in some temporary transportation issues that will be fixed shortly.

“It is a minimal, minimal issue and will be resolved within I would say in two weeks,” he said. “They are being picked up about four days later than they were a couple months ago on a transportation issue.”

Spokesman Jason Clark said it has taken the criminal justice department about one week more on average to pick up inmates as a result of the closures.

Whitmire also disputes the county’s contention that other large, urban counties are experiencing similar jail population growth, although some, including Bexar, have reported increases.

The uptick in the local jail population, Whitmire said, has more to do with – among other things – a policy implemented this year by the late Harris County District Attorney Mike Anderson to prosecute as felonies so-called “trace cases,” where a person is caught with less than 1/100th of a gram of crack cocaine. Anderson’s predecessor Patricia Lykos had treated those cases as misdemeanors, and claimed it helped to reduce the jail population by 1,000 inmates.

Anderson’s policy “is, no question, one of the factors” in the rising jail population,” Whitmire said, adding that it is an opinion he shares with “some tough Republican judges” like Mike McSpadden.

“We are the only ones that I know of in the urban areas that still prosecute less than 1 gram,” said the longtime state district judge, who supported the Lykos policy.

Anderson’s wife Devon Anderson, who was appointed to replace her husband this month after he died of cancer, told me Monday that she will continue to prosecute trace cases as felonies, providing there is probable cause, because state law says possession of any amount of cocaine is a felony “until the Legislature changes it.”

Anderson said Lykos was “engaging in a legal fiction” in prosecuting the cases as misdemeanors.

“I took an oath just last Thursday to uphold the laws of the state of Texas and that’s what I’m going to do,” she said.

Whitmire said he will urge Anderson to consider reversing her husband’s policy, and also has told her it is “nonsense to be talking about needing to transport inmates to other locations without first doing everything we can locally to have tough and smart jail policies.”

Former prosecutor Kim Ogg, who on Monday announced she will run for district attorney next year, said one of her first orders of business would be to reverse the trace case policy. Afterward, Anderson’s campaign released a statement confirming she, too, will be a candidate in 2014.

In Friday’s story, Caprice Cosper, a judge who heads the county’s Criminal Justice Coordinating Council, downplayed the link between the population increase and the trace case policy, saying the number of state jail felonies has not really changed even as felony filings have increased.

But, Cosper said, “what has gone up is the way they are being punished.”

Whitmire said that is a problem that needs to be fixed, too.

“Why the hell are you gonna let ‘em clog up your Harris County jail” and give them a lesser sentence “when they could get up to two years in a state jail?” he asked.

Anderson said she will examine that statistic in a meeting with prosecutors on Wednesday to see if the office has been “giving a disproportionate number of state jail felons county time.”

Another local factor Whitmire and others have also cited as a reason for the increasing jail population is theunwillingness of judges to grant as many no-cost personal bonds as judges in the state’s other large urban counties.

That means there are a lot more people sitting in jail, being held for trace cases and other things, who can’t afford bail.

“We’ve got hundreds of misdemeanors, some felons, that if they could post bond, had the money, they would be released,” Whitmire said.

Houston-area lawyer Patrick McCann, a former president of the Harris County Criminal Lawyers Association who recently was appointed by Gov. Rick Perry to the Specialty Courts Advisory Council, said that phenomenon is the “single largest fact to the jail overcrowding.”